As a handyman, I had my first exposure to installing vinyl siding last year. I must admit I was amazed at the difference in appearance of the houses and business we did before compared to after. Man, vinyl siding really cleaned up the appearance. The siding jobs went pretty well until the final job which was a large business. I learned a hard lesson about starting the job on the lowest point. My buddy actually began the job at the wrong location on the building because he was anxious to get started. Unfortunately, he picked a point he wanted to do first and it wasn’t the lowest point of the building. I was pleasantly surprised that I was able to think through the problem. But, the issue reappeared on the opposite corner of the building. It caused waste of both time and material. I just felt blessed to come up with the solution.

I learned a lot about outside corners and inside corners, starter strips and window trim. I cut my teeth on jobs for a landlord at the local college. The work was long and hot during the heat of the summer. It seemed as though each structure had lots of bump outs and such with more than two peaks to the roofs because of his tendency to add to the buildings in order to increase occupancy.

Somehow, I turned into the guy to create the bids for each job. I learned a lot there, too. Pictures of the buildings became a must in addition to diagrams and measurements. 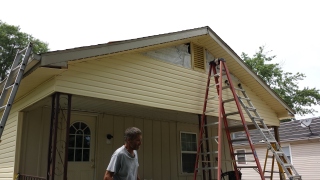 Our name says it all

Your home improvement is something you will live with for a long time. It should hold value to you. When you see it you should feel glad about your decision, not regretful. We want our work to be valuable to you.